A group of us went backpacking for 3 days in the Indian Peaks Wilderness. It ended up being a 37 mile loop including a 4 hour unintentional detour down the wrong trail, 18 hours of rain, and the most beautiful terrain I’ve ever hiked 🙂

First picture I took on the trail was of the out and back we weren’t supposed to be on. I thought the parking lot only had 1 trail head… I was wrong. 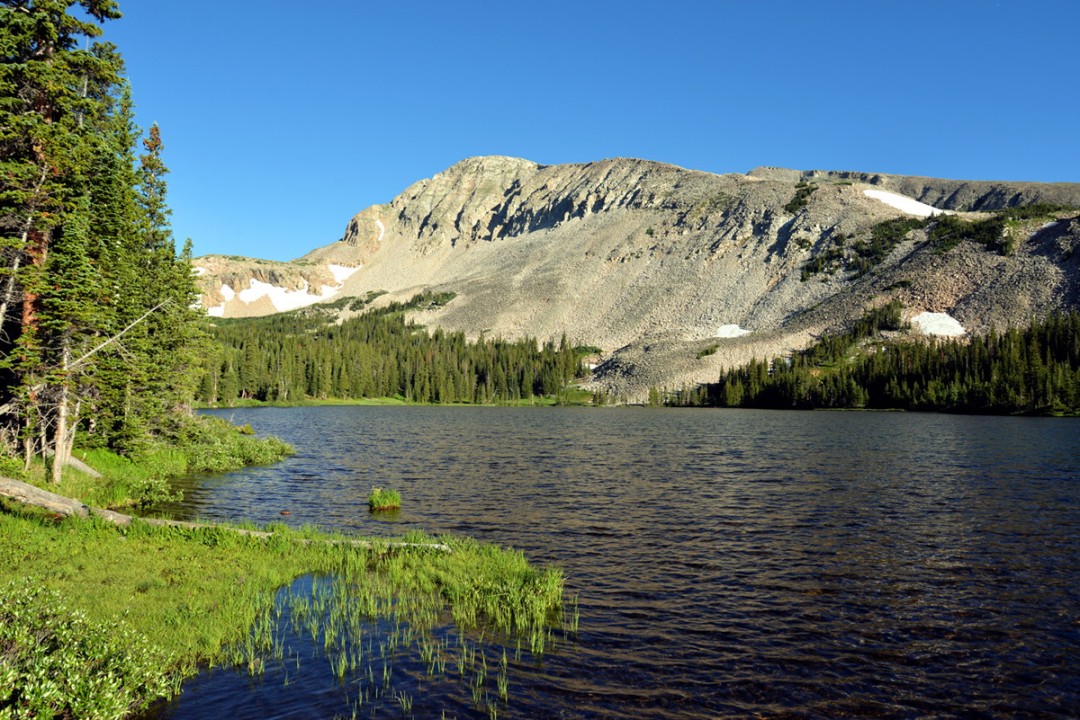 We encountered an older couple on the way up who starting asking about our backpacks (because he knew it was a dead end, but failed to mention any other trail head at the parking lot. Yes, I am placing the full blame on him). We were near the top when I took another look at the map and realized my mistake. Oh well, we got to see Blue Lake, 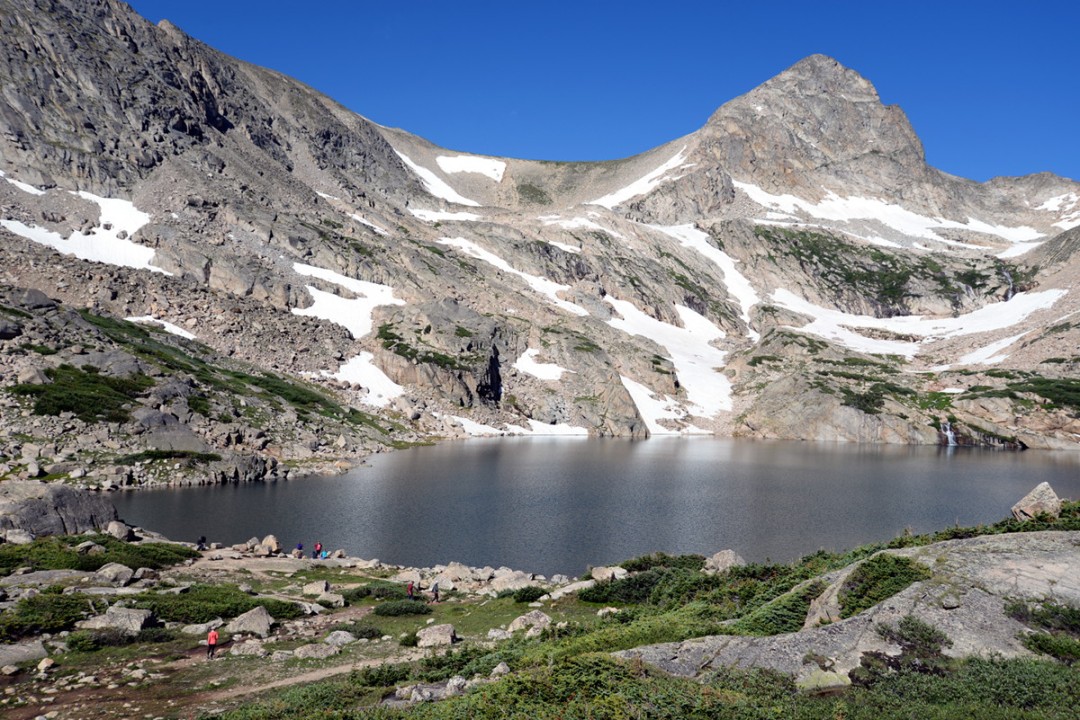 We hiked back down to the parking lot and re-began our trip on the correct trail. I still feel bad about adding an extra 6 miles to everyone’s day with full packs.

Mitchell Lake from a different perspective, 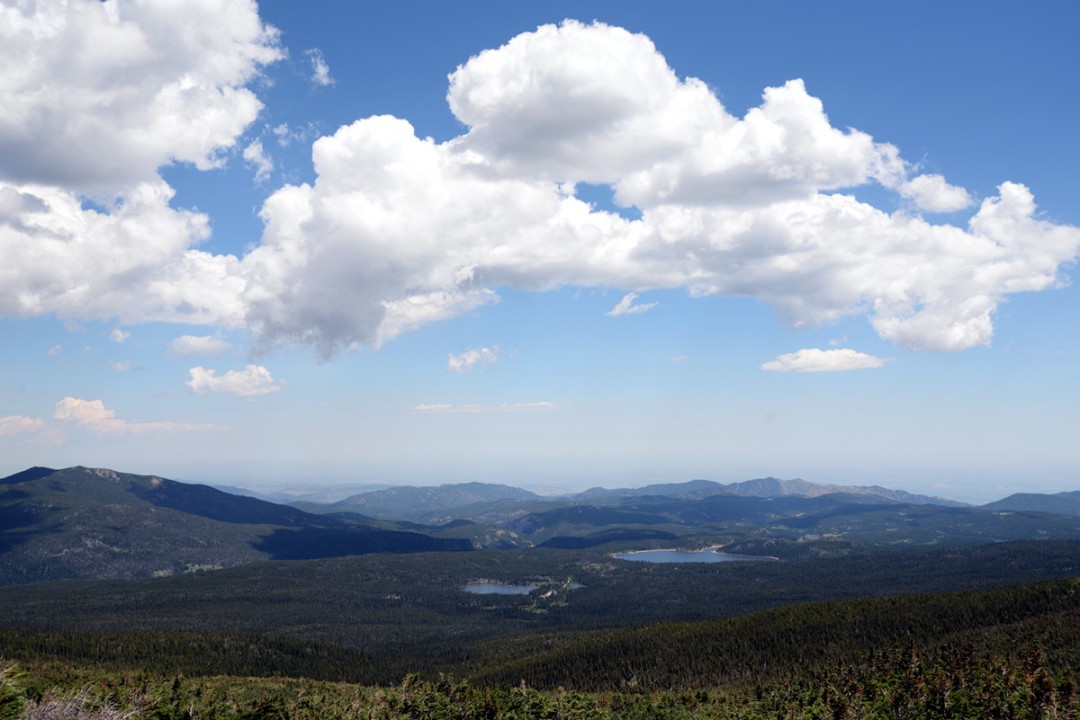 Only a few patches of snow left on the last weekend of July,

We saw some really wild red and orange mushrooms,

More fun crossings (we had to traverse this again the next day when the wood was wet), 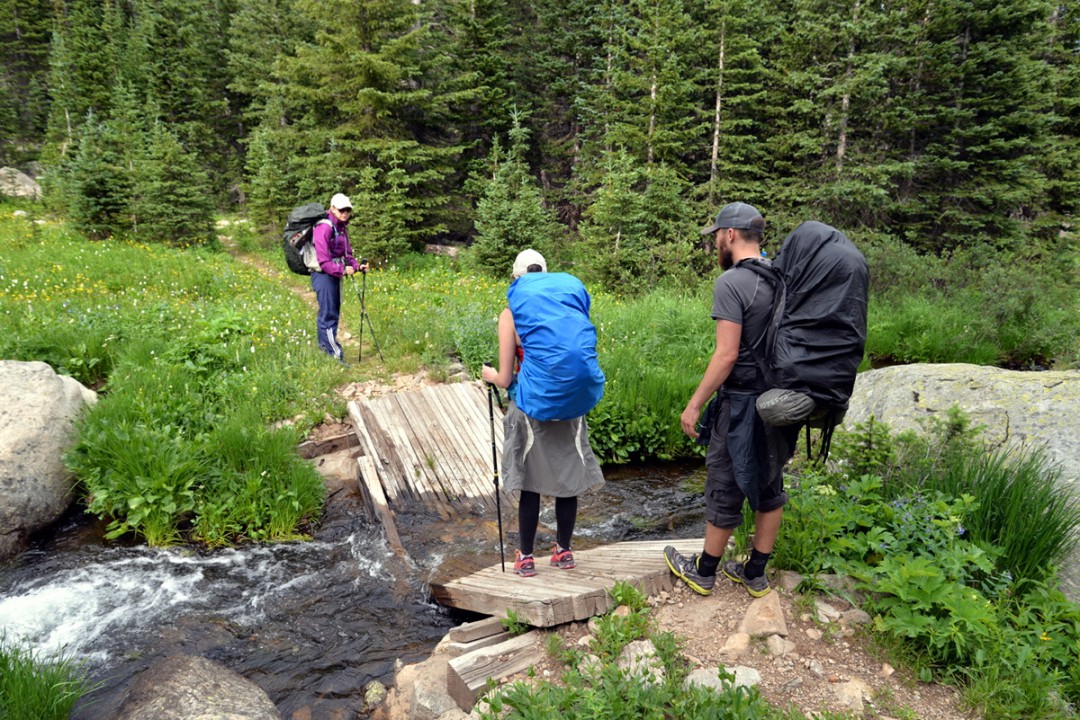 Our destination for the day, Red Deer Lake,

We had fantasized about taking a dip as we hiked in the hot sun, but it started raining just as we arrived, and didn’t stop until after noon the next day,

The sunrise was vibrant and beautiful, and lit up the sky for 5 minutes before returning to an overcast and rainy gray.

Our morning was a slow march in the rain up over Buchanan Pass. We stopped once to have a snack, which was a bad idea, because moving along was the only thing keeping us warm. Carie was ready to murder someone from the cold, and was also convinced she’d get trench foot if we didn’t stop and make camp to dry off 🙂

Looking back where we came from on top Buchanan Pass,

Still raining, so I put the camera away before our descent into the canyon,

This began my favorite part of the loop. Sharp peaks towering above, following a winding path through the lush green forest out into meadows and back into the trees.

About an hour into our descent, we stopped to setup a tarp in the trees and get out of the rain for a bit. We were snacking and trying to stay warm when we looked up to 2 moose about 50 feet away staring back at us. We were momentarily frozen before deciding there was nothing to do except pack up and get the hell out, we didn’t want them wandering any closer and getting angry. 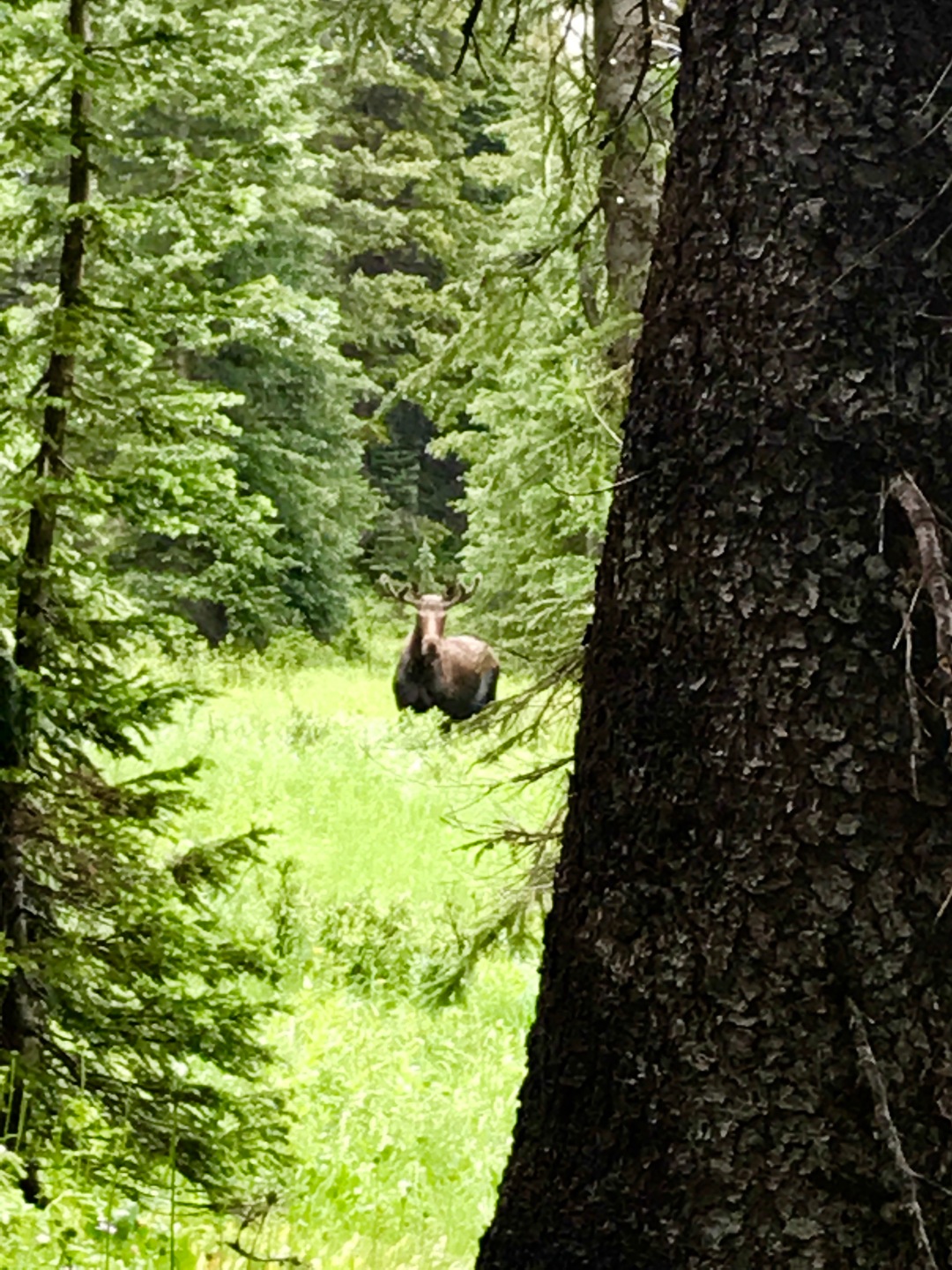 We passed a group a little later coming up the trail and asked their guide about moose. He validated our thoughts on getting out when we did, “Oh they’ll kill you dead… that’s nothing to mess with”.

We reached the junction to Monarch Lake and started up along Cascade Creek. The rain stopped, but we were still among the clouds,

We passed some impressive waterfalls,

We encountered a massive group of forest service workers repairing a bridge. They stopped and asked for our back country permit, which we discovered was valid for the prior weekend. Somehow the permit office was not in sync with what I requested, but they were pretty cool about it. I took a group picture for them, so we called it even 😉 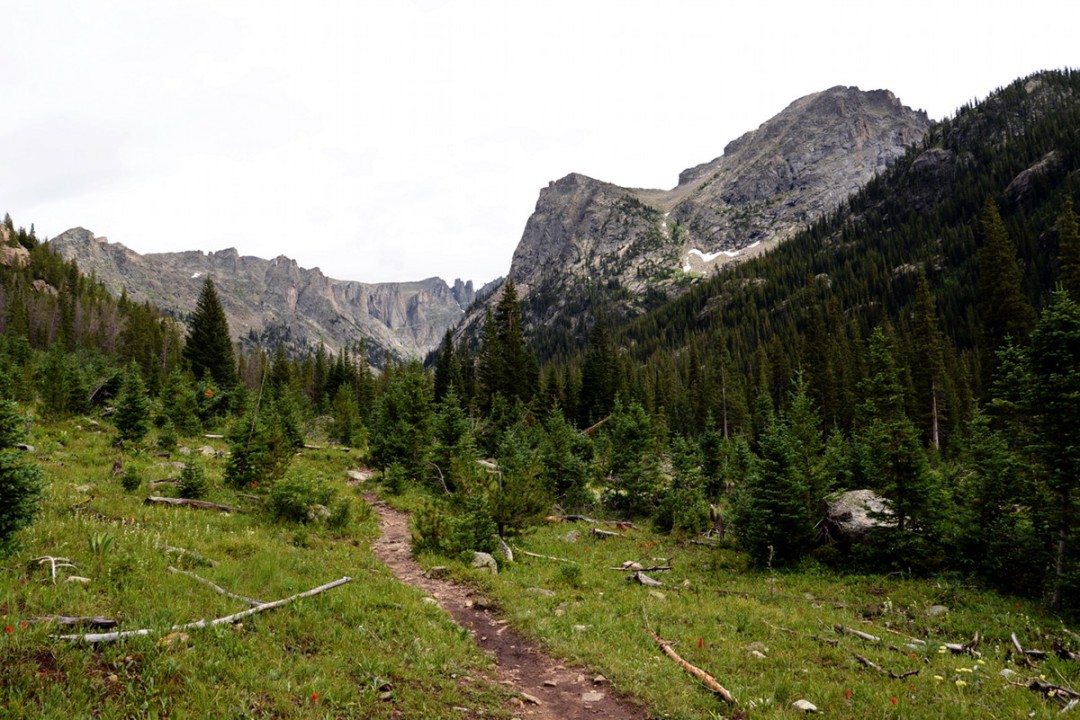 We finally made it to Crater Lake late in the afternoon, a little nervous about the permit situation and finding a spot for the evening. The campsites are really spread out and hard to find, but we managed to make camp in a nice area, and didn’t see anyone else come up after us looking for a spot.

View from just below our tents,

Sean and I were determined to swim this time, so we took the plunge in a lake almost exclusively fed by snow melt. The girls declined to join us.

If the above picture looks a little odd, it’s because it’s a reflection in the lake. Salvaged from the original with blown highlights,

Beautiful and sunny, a positive change of pace,

Up above Pawnee Lake, huffing our way over the pass as the storms roll in, 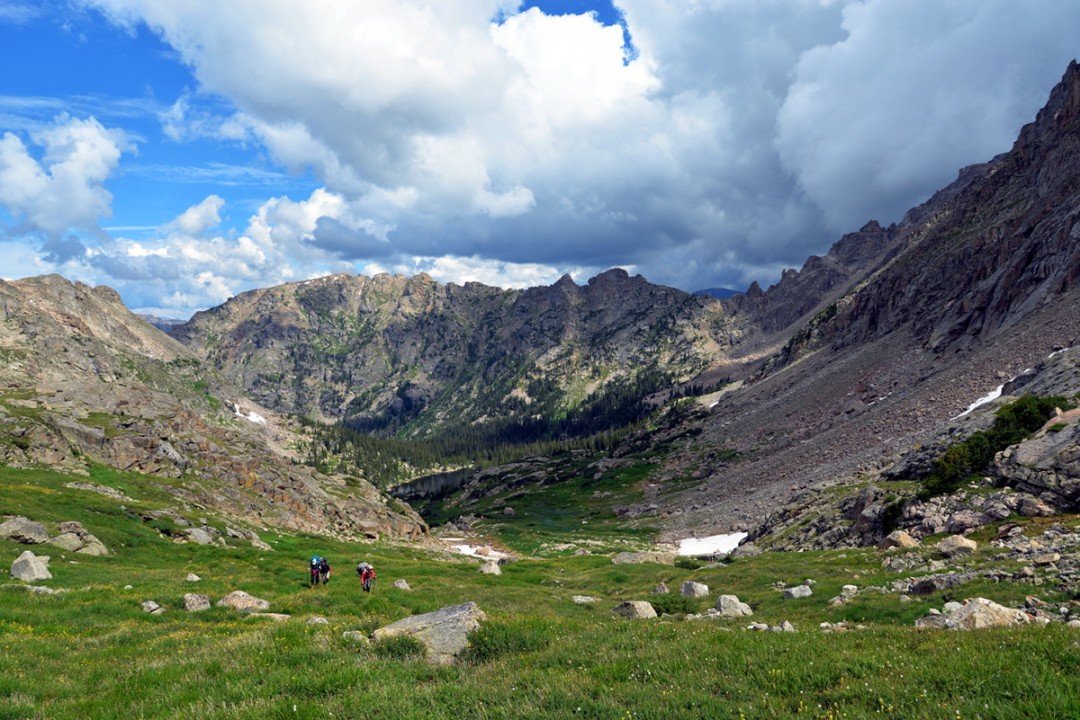 Another look at the climb, 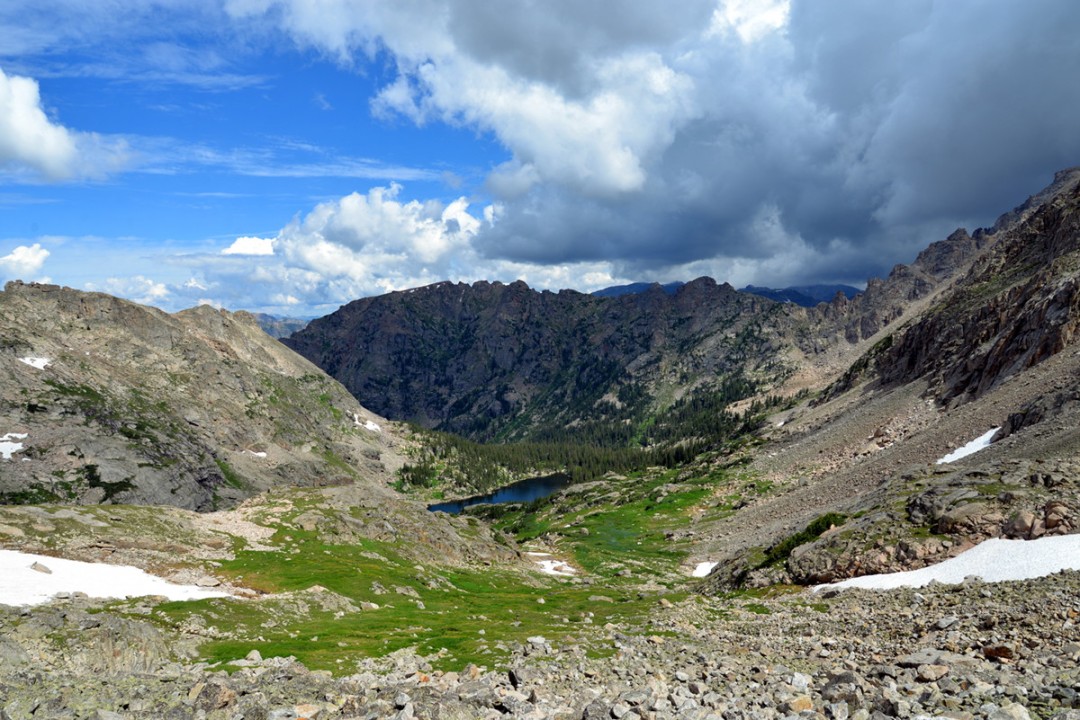 At the top we could see Lake Granby about 25 miles away,

Hiking in the clouds, 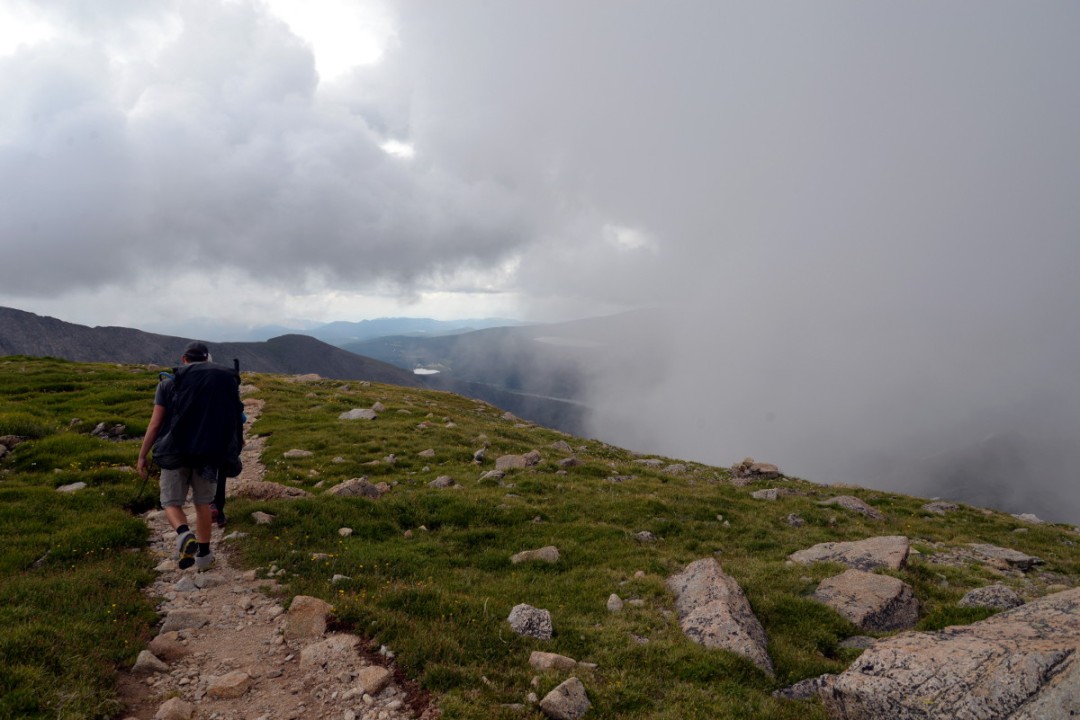 Brainard Lake peeking on the left, Long Lake, and Left Hand Reservoir up above, 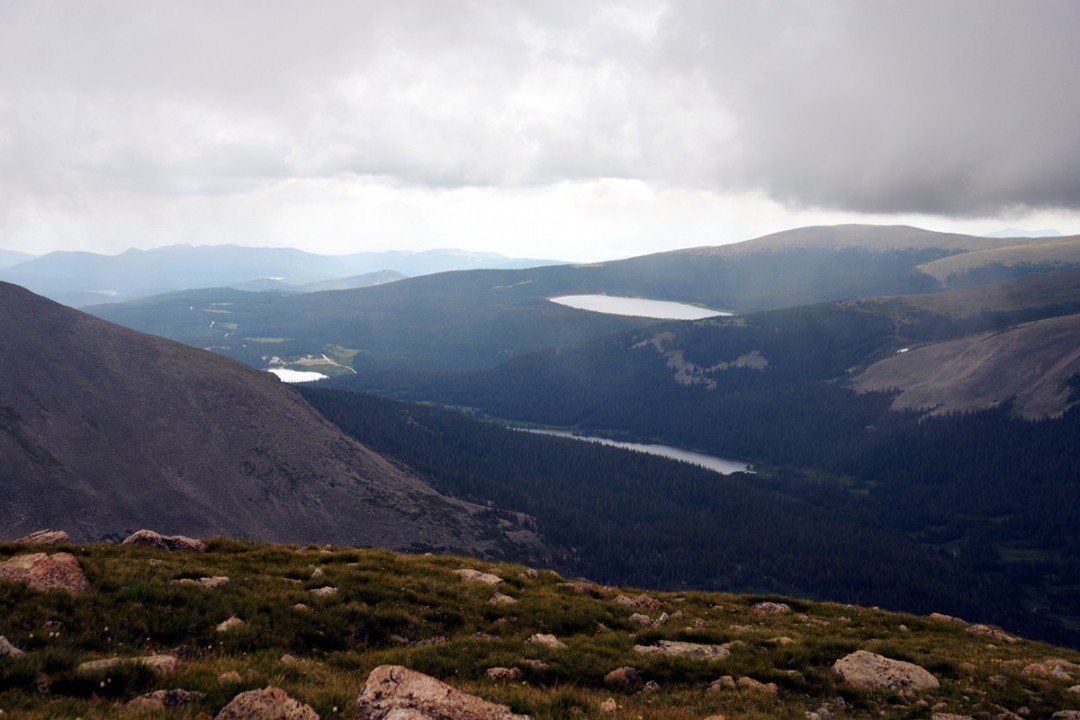 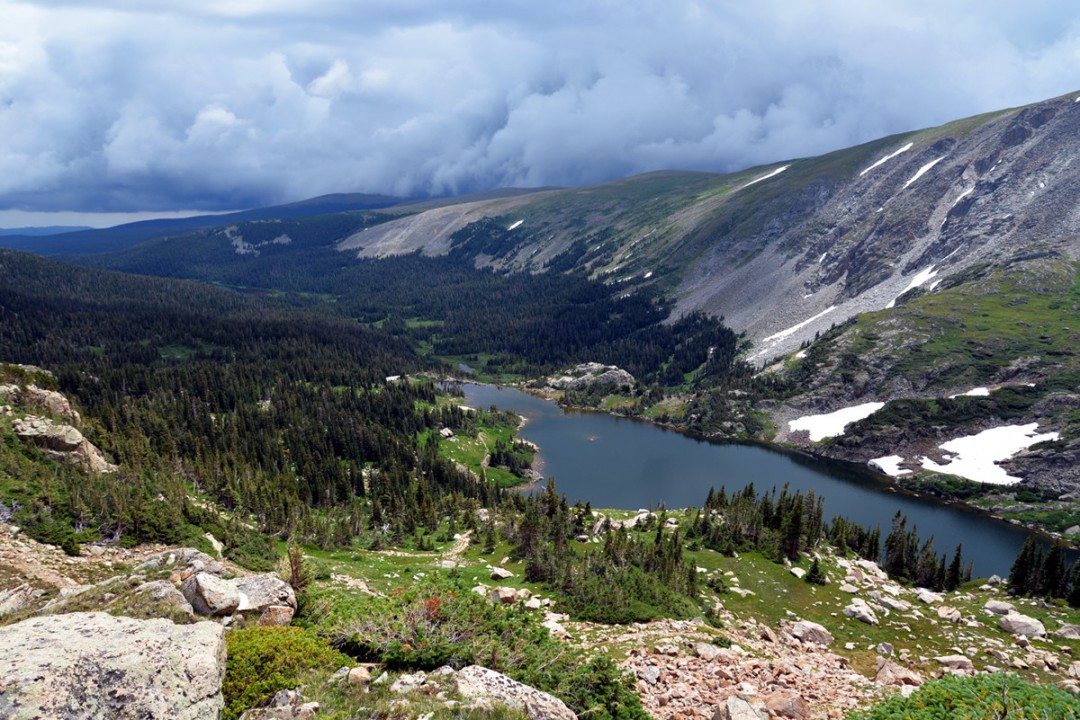 On our last mile before the finish line, we spotted a massive moose across the river just hanging out,

We were excited to get off the trail in order to find a burger and cold beer, but overall had a wonderful time (when it wasn’t raining). This wilderness area is highly underrated as it’s overshadowed by all the 14ers, but definitely worth the effort.